The real GDP, adjusted for inflation, was forecast to expand 3.0 percent in 2021, the Bank of Korea (BOK) said after freezing its benchmark interest rate at an all-time low of 0.50 percent at the regular rate-setting meeting.

It was unchanged from the BOK outlook unveiled three months earlier.

The real GDP contracted 1.0 percent in 2020, marking the first fall in 22 years on the back of the COVID-19 pandemic.

The BOK expected the real GDP to expand 2.5 percent in 2022, unchanged from the bank's previous forecast.

The bank said in a statement that the South Korean economy would keep its recovery momentum this year thanks to the improved export and investment, caused by the global economic recovery.

The BOK, however, noted that recovery in private consumption would be delayed amid the lingering pandemic and the lackluster household income.

Private consumption was projected to rise 2.0 percent this year, down 1.1 percentage points from the prior estimate of a 3.1 percent increase announced three months ago.

The pandemic resurged here in November last year, and the government kept its five-tier social-distancing guideline at the second-highest level for about three months through the middle of February this year.

In the latest tally, South Korea reported 396 more cases of COVID-19 for the past 24 hours, raising the total number of infections to 88,516. The daily caseload remained in triple digits since Nov. 8 last year.

BOK Governor Lee Ju-yeol told an online press conference after the monetary policy meeting that the prolongation of the pandemic led to a sharp downturn in the face-to-face services consumption that weakened income of those who work in the relevant businesses.

The number of jobs was predicted to grow 80,000 this year, down from an estimated expansion of 130,000 unveiled three months earlier. Outlook for jobless rate for this year was raised from 3.8 percent to 4.0 percent.

Lee forecast that the global terms of trade would be favorable this year due to the vaccination campaigns in major economies and the aggressive fiscal stimulus measures.

Export for goods was expected to expand 7.1 percent in 2021, up 1.8 percentage points from the previous forecast.

Facility investment was projected to go up 5.3 percent in 2021, up 1.0 percentage point from the prior estimate.

Inflationary pressure was predicted to mount this year amid the protracted low-rate trend. The BOK has left its key rate unchanged at the current 0.50 percent since May last year.

Outlook for headline inflation was set at 1.3 percent in 2021, up 0.3 percentage points from the previous estimate.

The headline inflation was predicted to post 1.4 percent in 2022, down 0.1 percentage point from the prior outlook. 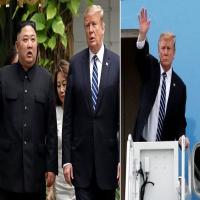