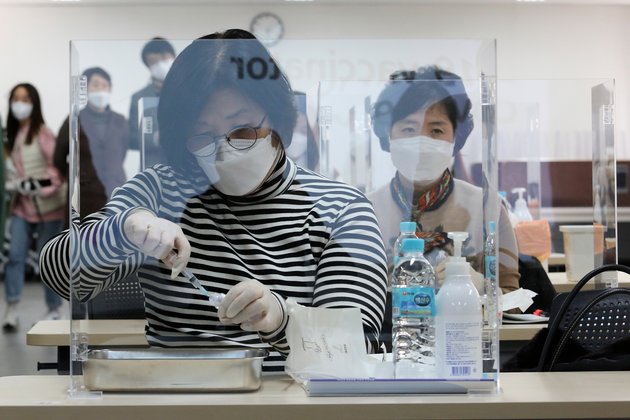 SEOUL, SOUTH KOREA - After carrying out one of the world's most successful initial coronavirus responses, South Korea this week begins COVID-19 vaccinations, making it one of the last developed countries to start mass inoculations.

Beginning Friday, South Korea will give the AstraZeneca vaccine to staff and some patients at nursing homes and similar facilities. A day later, it will begin administering the Pfizer vaccine to medical staff treating coronavirus patients.

That is about two and a half months after vaccinations began in countries such as Britain and the United States.

Unlike some nations, the virus has never spread out of control in South Korea, giving the government more time and tools to combat the pandemic.

"Vaccines are important for disease prevention, but vaccines alone are not enough. South Korea's strategy involves more than this," says Ki Mo-ran, an epidemiologist who has advised the South Korean government on its coronavirus response.

A look at the numbers helps explain the situation. The United States has suffered more than half a million COVID-19 deaths. The number of COVID-related deaths in Britain has exceeded 120,000. By contrast, a little more than 1,500 South Koreans have died from the disease.

Though South Korea has seen small infection spikes in recent months, it's been able to manage the outbreaks by adjusting social distancing guidelines.

As a result, the pandemic has rarely felt dire in South Korea. Restaurants and bars in Seoul, where most South Koreans live, now stay open until 11:00pm. Buses and trains are packed. Street demonstrations, which in normal times are omni-present, have also begun to re-emerge.

Still, the vaccine delay has prompted accusations that the government didn't act quickly enough to purchase vaccines, the one tool that would allow the country to permanently leave the pandemic behind.

"(The government) should have been more aggressive in securing the vaccine and more cautious about the vaccine campaign after talking with medical experts and citizens. But they did the opposite," said Choi Jae-wook of the Korean Medical Association, speaking to foreign media in Seoul last week.

South Korea has ambitious vaccination goals. It hopes to vaccinate 10 million high-risk individuals by July and to achieve herd immunity by November.

But many experts say those timelines are unrealistic. According to an estimate by the Economist Intelligence Unit, South Korea is among the countries that will not achieve widespread vaccination until mid-2022.

Nurses take part in the coronavirus disease vaccination mock drill at a first aid facility of the COVID-19 vaccination center in Seoul, Feb. 9, 2021.

South Korean officials in part have blamed manufacturing and logistic delays, which have disrupted vaccination plans around the world.

But Ki says focusing on herd immunity misses the point. More important, she says, is preventing deaths, which South Korea has been able to do.

"And even if we reach 70% of group immunity, it does not mean that COVID-19 will disappear magically," she told VOA.

According to an opinion poll this week, less than half of South Koreans plan to receive the vaccine immediately after becoming eligible for the shots.

Some of that skepticism appears to stem from the South Korean government's decision to withhold approval of the AstraZeneca vaccine for those over the age of 65 pending further clinical trials.

"I think it'd be better to get a vaccine other than the AstraZeneca one," he told VOA.

South Korean Prime Minister Chung Sye-kyun last week tried to assure the public about the vaccine, saying it had been approved in 50 countries and causes no serious side effects.

"I repeat, there is no issue with safety," he said.

After a flurry of recent agreements with several vaccine makers, South Korea says it has secured more than enough doses for its entire population, though it isn't clear when the imported vaccines will arrive.

Eventually, the government hopes to supplement those imports with a domestically produced vaccine, which experts say would be cheaper and easier to quickly distribute.

Having domestic vaccine production capability could also make it easier for South Korea to produce modified vaccines in response to COVID-19 variants, says Justin Fendos, a professor at South Korea's Dongseo University, writing in the Diplomat.

"In fact, I would predict, despite South Korea's slow start to vaccination, that the country will still be one of the first to be fully vaccinated," he says. "The speed at which this result is achieved will likely be tied intimately to the speed at which its domestic infrastructure becomes operational."

Lee Juhyun contributed to this report. 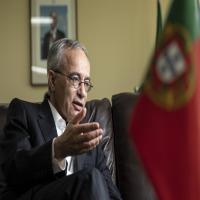